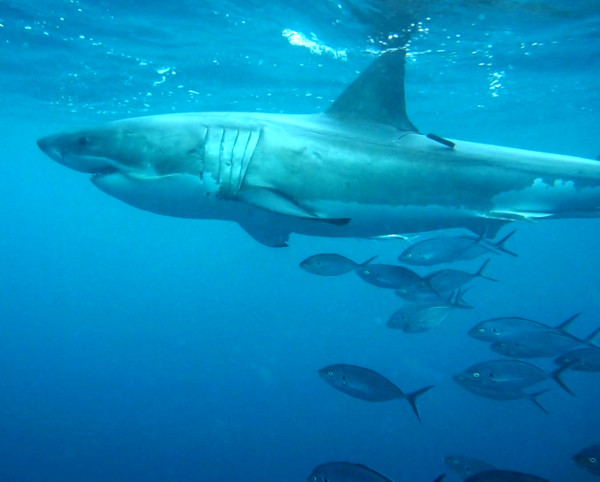 CSIRO has used an innovative new approach to estimate the size of white shark populations in Australian waters.

CSIRO research indicates that there are about 750 adults in the eastern Australasian white shark population (with a range from 470 to 1030), and about double that number in the southern-western population.

The research also reveals the total number of white sharks in the eastern population is 5460, with a potential range between 2909 and 12,802.

The total population could not be calculated for the southern-western population.

Until now, information about adult white sharks has been elusive, because adults are very difficult to sample, particularly on the east coast.

Thanks to a breakthrough in genetic and statistical methods, this problem has now been solved.

The breakthrough means scientists have been able to estimate adult shark numbers without having to catch or even see any adult white sharks.

Instead, they located the tell-tale marks of the parents in the DNA collected from juveniles.

For the eastern population, researchers analysed DNA from 214 juveniles to find the genetic ‘marks’ of both parents.

More than 70 individuals were found to share a parent, and this number has a statistical relationship to the total size of the adult population.

“The chances of any two juveniles in a population sharing a parent depends on how many adults are around to share the job of reproduction,” lead author of the paper, Dr Richard Hillary of CSIRO said.

“In a small population, more juveniles share a parent than in a large population, and vice versa.

“And as more juveniles are sampled over time, the parental marks we detect also reveal patterns of adult survival, which we determined to be greater than 90 per cent in the east.

“We found many cases of parents (both male and female) that apparently had survived 20 or more years between the births of their children.”

In the southern-western population, DNA samples were collected from 175 sub-adult and young adult males from Geraldton in WA to western Victoria.

From these 175 samples, 27 were found to be half-sibling pairs (shared one parent).

A total population estimate has not yet been compiled for the southern-western population because direct estimates of juvenile survival rates (a crucial piece of information obtained by tagging a relatively high number of juvenile sharks) are not available.

Adult populations for both the eastern and southern-western populations were estimated to have been stable since the onset of white shark protection (at the end of the 1990s).

This is consistent with the long time it would take for the effects of the various control programs and levels of fishing that existed pre-protection (which focused mostly on juveniles) to flow through to the adult population.

Sharks take 12–15 years to become mature adults, so we wouldn’t expect to see the effect on the adult population of that reduction in juvenile shark mortality until the next few years.

Estimating the trend in total population size for both populations requires continued teamwork, sampling and analyses, using methods and institutional relationships developed in this project.

“Now that we have a starting point, we can repeat the exercise over time and build a total population trend, to see whether the numbers are going up or down,” Dr Hillary said.

“This is crucial to developing effective policy outcomes that balance the sometimes conflicting aims of conservation initiatives and human-shark interaction risk management.”