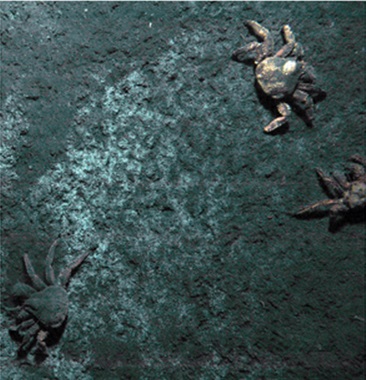 Scientists have shed light on the lives-of-plenty enjoyed by lithodid crabs in the deep sea, made possible by a constant smorgasbord of bacteria, which themselves feed on accumulated methane.

Cold seeps allow methane to gather is some of the ocean’s deepest areas, such as near the coast of Costa Rica. Typically the bottom of the deep sea is virtually deserted, but an international team have discovered that where cold and methane gather, crustaceans and bacteria come to feast at the oasis in the sea.

The phenomenon of bacterial mats forming at methane seeps was already documented, but until now scientists did not know how many other sea creatures come to graze the seabed.

Microscopic party-goers turn up fashionably early. Specialised microbes convert methane and sulphate from sea water to hydrogen sulphide, releasing carbon dioxide. Specially adapted bacteria, many of which live in symbiosis with worms and clams, use the hydrogen sulfide for their growth. Inside their cells, the bacteria incorporate carbon which comes from the chemical reaction of methane.

Researchers were surprised to find the lithodid crab, normally a gourmand of varied tastes, coming to enjoy the methane-bacterial soup.

Dr. Peter Linke, a biologist at GEOMAR Helmholtz Centre for Ocean Research and co-author of the newly published study said: “As far as we know, deep-sea crabs feeding on bacterial mats were discovered only one single time before... Our team was the first one to also generate a photographic documentation over a longer period which allows scientific interpretations.”

A deep-sea observatory was equipped with a camera and placed above a bacterial mat to record days upon days of footage. Across a period of about 400 hours, the camera took a shot every 30 minutes.

“On 184 images, crabs were seen crawling over the bacteria and apparently grazed the bacterial lawn,” researcher Dr Helge Niemann described in the observations.

Further revelations came when a crab was taken back to the lab.

“DNA and isotopic analyses at Max Planck Institute for Marine Microbiology later showed that the crabs actually feed on the bacterial mat and took up large amounts of chemically-produced carbon. In the body cells, we have also found traces of carbon, which was formed under the influence of light through photosynthesis,” Dr Niemann said.

“Therefore, we assume that cold seeps make an important but not the only contribution to the diet of migratory animals on the ocean floor and in this way enters into carbon, which is produced by chemosynthesis of methane in the marine food web.”

More details are available in the report, accessible here.