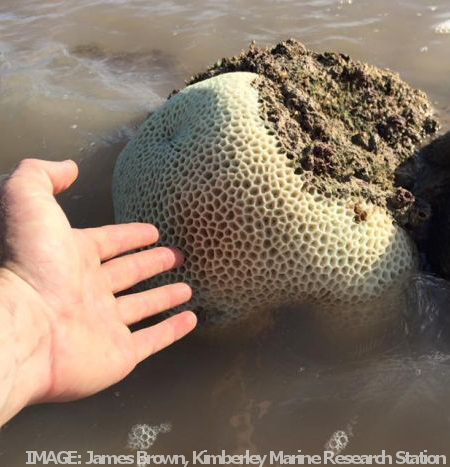 Evidence has been found of coral bleaching on Western Australia's Kimberley coast.

“We've seen some signs of coral bleaching on the intertidal corals which have been exposed during the big tides,” he told reporters.

“What's important is that this appears to be quite a significant event.

“What we need people to do, is the local community in Broome, that gets an opportunity to see this, either through recreation or through work, reports it back to us, so we can get a sense of just how extensive and how severe the effects are.”

There are some handy phone apps that can help.

One app, called CoralWatch, was developed at the University of Queensland specifically to document bleaching events.

“It's designed for citizen science, so it's quite simple for people to download the App, and while they're out they can load photos straight up, and make a comment,” Brown said.

“You don't need to be a scientist. This is really an opportunity for everyone to be a part of this in getting our heads around something that I don't think any of us have seen before.”

Another app, GBRMPA's Eye on the Reef, allows users to share photos of things they have seen on the Great Barrier Reef, including wildlife, pests like Crown- of- thorns starfish or marine pollution, and special events like coral spawning.