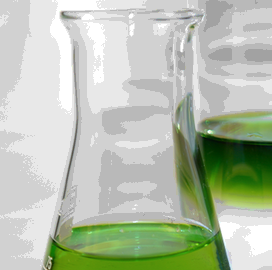 Chinese scientists have developed a process for converting plant waste into aviation fuel.

Cellulose, the main component in the biofuel, is a cheap, renewable, and highly abundant polymer that forms the cell walls of plants.

In a new study, researchers have for the first time produced complex polycycloalkane compounds from cellulose, which can be used as high-density aviation fuel.

The new biofuel could be instrumental in helping aviation ‘go green’.

Through a complex process, researchers at the Dalian Institute of Chemical Physics created a material with a low freezing point and a density about 10 per cent higher than that of conventional jet fuels.

The high density means it can be used as either a wholesale replacement fuel or as an additive to improve the efficiency of other jet fuels.

“The aircraft using this fuel can fly farther and carry more than those using conventional jet fuel, which can decrease the flight number and decrease the CO2 emissions during the taking off (or launching) and landing,” says research scientist Dr Ning Li.

Li and his team believe the cheap, abundant cellulose feedstock, fewer production steps, and lower energy cost and consumption mean the process will soon be ready for commercial use.

They also predict it will yield higher profits than conventional aviation fuel production because it requires lower costs to produce a higher-density fuel.

A new study on the process is accessible here.

The technical process for creating the fuel is as follows:

This resulted in a 71 per cent isolated carbon yield - a 5 per cent increase from the product yield in their initial work. Finally, they reacted hydrogen with the 2,5-hexanedione from wheatgrass cellulose to obtain the final product: a mixture of C12 and C18 polycycloalkanes.