Chicken eyes give better view on new state of matter 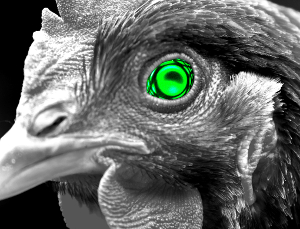 The light-sensitive cells in the eye of a chicken represent the first known biological occurrence of a potentially new state of matter.

Research has revealed that the microscopic cones in the eye appear to be arranged in a system of ‘disordered multi-hyperuniformity’.

The technological breakthroughs offered by the complex structure will add to the chooks’ long list of achievements; laying eggs, signalling dawn, being delicious, modelling for rubber toys and helping with soup.

Disordered hyperuniformity is a recently-described phenomenon in the basic structure of materials. It contains aspects of crystal and liquid states of matter; exhibiting order over large distances and disorder over small distances.

Like crystals - these states greatly suppress variations in the individual granules of a substance over large spaces, so that the arrangement becomes highly uniform.

Like liquids - disordered hyperuniform substances have the same physical properties in all directions.

Combined, these characteristics mean that hyperuniform optical circuits, light detectors and other materials could be controlled to be sensitive or impervious to certain light wavelengths, researchers report.

“Disordered hyperuniform materials possess a hidden order,” explained Salvatore Torquato, a Princeton professor of chemistry and author of a new study on the structure of chicken eyes.

It was Torquato who, with Frank Stillinger, a senior scientist in Princeton's chemistry department, first identified hyperuniformity in a paper published in 2003.

“We've since discovered that such physical systems are endowed with exotic physical properties and therefore have novel capabilities,” Torquato said.

“The more we learn about these special disordered systems, the more we find that they really should be considered a new distinguishable state of matter.

The findings came from in-depth studies of the light-sensitive cones in the eye of a chicken.

The eyes contained five cones; four for different colours and a fifth for sensing light levels. Each cone is a different size, and at first glance their layout appears to be completely random.

But close investigation has revealed a complex formula which arranges the cells in a chaotic but highly effective way.

It turns out that each type of cone has an "exclusion region" around it that other cones cannot enter. Cones of the same type shut out each other more than other cones, forming distinctive patterns through this variant exclusion.

Each type of cone's pattern overlays the pattern of another cone so that the formations are intertwined in an organized but disordered way—a uniform disarray.

So, while it appears that the cones are irregularly placed, their distribution is actually uniform over large distances.

The complex natural system is another example of evolutionary problem-solving.

“Because the cones are of different sizes it's not easy for the system to go into a crystal or ordered state,” he said.

“The system is frustrated from finding what might be the optimal solution, which would be the typical ordered arrangement. While the pattern must be disordered, it must also be as uniform as possible. Thus, disordered hyperuniformity is an excellent solution.”

The finding adds to the growing knowledge of hyperuniform states, adding a new dimension dubbed ‘multi-hyperuniformity’.

Multi-hyperuniformity means that the elements that make up the arrangement are themselves hyperuniform. While individual cones of the same type appear to be unconnected, they are actually linked by exclusion regions, which they use to self-organize into patterns.

He and his co-authors speculate that this behaviour could provide a basis for developing materials that can self-assemble into a disordered hyperuniform state.

“If I gave you the avian system with these cones and removed the red, it's still hyperuniform. Now, let's remove the blue—what remains is still hyperuniform. That's never been seen in any system, physical or biological. If you had asked me to recreate this arrangement before I saw this data I might have initially said that it would be very difficult to do,” Torquato said.

With a powerful natural model to work on, researchers will now investigate more possibilities for biological and artificial hyperuniform materials.

“We still know nothing about the cellular and molecular mechanisms that underlie this beautiful and highly organized arrangement in birds. So, future research directions will include efforts to decipher how these patterns develop in the embryo,” Torquato said.

More information is available in the latest paper, accessible here.