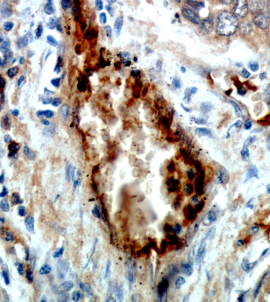 A new approach to killing cancer does not attack tumours directly, but stifles them by cutting their blood supply.

A group of researchers from the US is working on a DNA vaccine to destroy tumours by targeting the blood vessels that allow them to flourish.

The new vaccine also creates an immune response to the tumour itself, amplifying the power of the attack by a phenomenon called epitope spreading.

It is not the first time researchers have aimed their assault at tumour angiogenesis; the formation of new blood vessels that feed the tumour cells, but the new approach avoids the failings of previous attempts by not interfering with normal processes for wound healing and development.

The DNA vaccine specifically targets TEM1 (tumour endothelial marker 1), a protein that is over-expressed in tumours and poorly expressed in normal tissues.

“We demonstrated that by targeting TEM1, our vaccine can decrease tumour vascularisation, increase hypoxia of the tumour and reduce tumour growth,” says Andrea Facciabene, PhD, a research assistant professor at the University of Pennsylvania.

“Our results confirm that we were directly targeting the tumour vasculature and also indirectly killing tumour cells through epitope spreading,” she said.

They found tumour formation was delayed or prevented in mice vaccinated with the TEM1 DNA vaccine. Specifically, they found that the mouse tumours had suppressed growth, decreased tumour vessel formation, and increased infiltration of immune cells into tumours.

The compound worked on multiple levels. After killing the endothelial cells that make up the tumour vessels (vasculature), it also stimulated epitope spreading, meaning that the immune cells of the mice gathered pieces of dead tumour cells (due to hypoxia) to create a secondary immune response against the tumour itself.

The vaccine induced specific T cells to fight other tumour cells expression other proteins, in addition to TEM1, thus increasing its therapeutic efficacy.

“Using this vaccine simultaneously with radiation may eventually have a double synergy,” Facciabene says.

“Both treatments affect the tumour endothelium, radiotherapy could help the phenomenon of epitope spreading induced by the TEM1-TT vaccine.”

In addition to ongoing pre-clinical work with human TEM1, Facciabene and colleagues are planning to move on to Phase I human clinical trials soon.