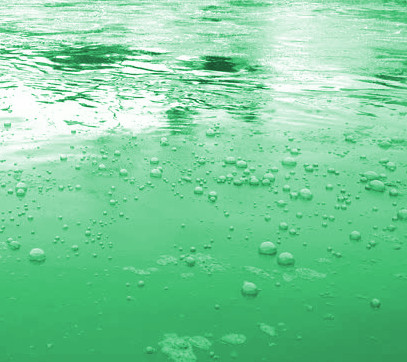 Cultivated bacteria are being used to clean sewage at a wastewater plant in Brisbane.

Anammox is an abbreviation for anaerobic ammonium oxidation. The term refers to a microbial process mediated by bacteria in which certain compounds can be converted directly into nitrogen and water.

The process being used by Urban Utilities uses a type of bacteria first discovered in the 1990s, though it is likely to have been living in anaerobic conditions since long before the dinosaurs or most other life on earth.

When presented with high loads of nitrogen-based compounds, Anammox bacteria give off a distinct red glow, indicating the presence of live bacteria working to remove nitrogen from the stream.

Anammox bugs feed on ammonium and nitrogen to remove the pollutants from wastewater, reducing the need for chemicals to do the job.

Using the bacteria requires 60 per cent less energy than traditional methods, and is expected to save Urban Utilities $500,000 a year in operation costs.

“Luggage Point is Urban Utilities’ largest treatment plant, treating about 60 per cent of Brisbane’s sewage. As cities grow, they produce more wastewater and treatment plants need to grow in order to continue to provide those services,” Mr Todhunter says.

“And also to meet our environmental requirements to protect the receiving waterways, which is one of our primary roles.

Urban utilities has been working with another company, Veolia Water Technologies, to grow the bacteria locally, as it cannot be imported.

“Biosecurity laws prohibit anammox from being transported into Australia. This is why we started the journey of cultivating it,” Mr Todhunter said.

“Once we have large quantities of biomass, we will then be able to act as a biofarm for the rest of Australia. This means that Urban Utilities, along with Veolia, can assist other wastewater utilities with the same technology, and to receive the same benefits.”

Wastewater treatment plants generally produce two products — a clean effluent, which can be recycled or discharged to the environment, and a sludge product, which comprises contents that are similar to what we flush down our toilets, albeit with the water removed.

When managed correctly, this sludge can also be recycled as a fertiliser or used to generate alternative forms of energy.

Typically, when sludge is “squeezed” to remove water, it creates a liquid waste stream that is extremely concentrated with nitrogen — most of it in the form of ammonia.

Elevated concentrations of nitrogen in rivers and oceans can result in algae growth.

With the Anammox process, this concentrated stream is directed to a mixed tank filled with media that houses the bacteria.

The bugs can remove up to 90 per cent of ammonia and 85 per cent of the total nitrogen content from the stream, significantly reducing the running costs involved.