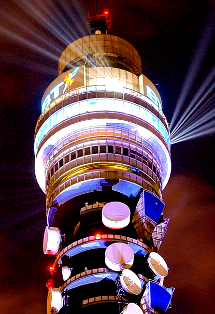 British engineers have set up what may be the world’s fastest internet connection, transferring data between two cities at a mind-boggling 1.4 terabits per second.

The incredible speed is fast enough to get a copy of Wikipedia in a fraction of a second, or download thousands of hours of music in less than a minute.

The high speed line is the result of a joint project by French telecoms firm Alcatel and British equivalent BT Group. It was made possible by a new technique and protocol called ‘Flexigrid’, which allowed programmers to overlay several separate channels of information in a single connection.

The result was dubbed the ‘Alien Super Channel’, consisting of seven 200 gigabit per second connections.

The team of researchers managed the technical feat on existing optical lines between London and Suffolk, proving companies will be able to meet ever-increasing demands without fundamental changes to the network just yet.

Also in the world of high-speed internet, South Korean telecoms provider SK Telecom Co says it is preparing to roll out a new service. SK claims it will have customers browsing mobile internet at 300 mbps this year.

The company is looking to dominate advances in the mobile market.

“We helped fuel national growth with 2G services in the 1990s, 3G in the 2000s and 4G around 2010,” a spokesperson for South Korea’s Ministry of Science and Technology said in a statement.

“Now it is time to take preemptive action to develop 5G.

“Countries in Europe, China and the US are making aggressive efforts to develop 5G technology… and we believe there will be fierce competition in this market in a few years.”

In Australia, it appears increasingly unlikely that internet users will be able to access such rapid breakthroughs, as a majority of the country is connected to copper-based infrastructure with little government intention for large scale improvements.