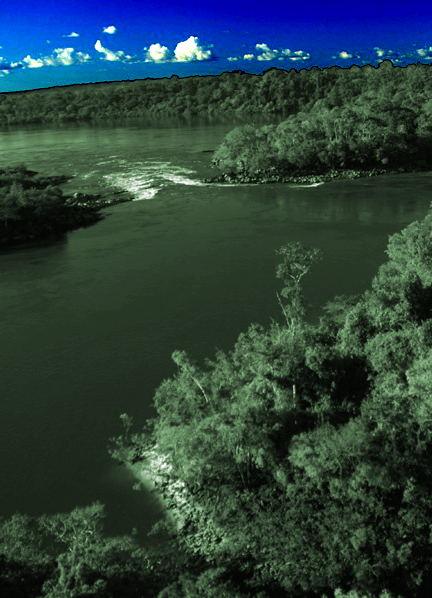 The Amazon Rainforest – known as the ‘Lungs of the Earth’ – is running out of breath.

A new study shows that dry conditions are causing a decrease in the Amazon’s ability to inhale carbon dioxide from the atmosphere.

The paper published in the in the Proceedings of the National Academy of Sciences says that if the Amazon’s breaths become more shallow, a feedback loop could be created and further reduce its lung capacity.

Researchers at Oregon State University say that a decline in precipitation has contributed to less healthy vegetation since 2000.

“It’s well-established fact that a large part of Amazon is drying. We’ve been able to link that decline in precipitation to a decline in greenness over the last 10 years,” said Thomas Hilker, lead author of the study and forestry expert.

Figures show rainfall has decreased by up to 25 per cent across a vast portion of the south-eastern Amazon since 2000.

While the cause of the decline in rainfall has n0t been ascertained; deforestation and atmospheric circulation shift are considered likely culprits.

The amount of carbon the Amazon can stores is truly staggering.

The forest holds an estimated 120 billion tonnes of carbon in its plants and soil, much of which is drawn from the atmosphere by forest flora.

But as rainfall drops, vast swathes of forest turn brown, reducing their ability to take in more carbon dioxide.

The Amazon “essentially takes up 25 per cent of global carbon cycle that vegetation is responsible for,” Hilker said.

The potential loss is almost unprecedented. In 2005 — an El Niño year — the Amazon lost an estimated 1.6 gigatonnes of carbon due to a drier climate.

The study notes that a warming of polar regions could pull a band of rain to waters the Amazon and other parts of the tropics further north. This would increase the chance of Amazonian drought and a subsequent increase in carbon emissions.

“An Amazon already responding to drought is big news for climate. Maybe a small part of that signal is actually due to deforestation, but that still implies a loss of forest productivity that influences how the Amazon forest impacts climate globally,” Abigail Swann, a climate and ecosystems researcher at the University of Washington, has told reporters.

Researchers say they are now working to refine their assessment, by combining separate interpretations of ground and satellite data.