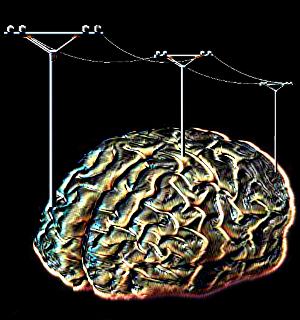 Neuro-engineers have successfully enabled an almost entirely paralysed person to control a tablet PC with her brain.

Brain-machine interfaces are becoming relatively common as a tool to enable paralysed people to interact with computer screens.

Until now, such devices have been limited to eye- or head-tracking devices that use eye movement to control the cursor on a computer screen, but these devices are imprecise and extremely tiring for their users’ eyes.

But a team led by Stanford University neuro-engineer and physician Dr Paul Nuyujukian has taken a big step forward – getting messages directly from the brain, rather than interpreting eye movements.

“We really wanted to move these assisted technologies towards clinical feasibility,” Dr Nuyujukian said in a presentation at the recent Society for Neuroscience annual conference in Chicago.

Nuyujukian’s team used a neural prostheses to directly link the brain with computers.

A micro-electrode-array chip just a few millimetres in length was directly implanted into the brain, where it picked up neural signals associated with intent, decoded them with sophisticated algorithms and used them to control mouse cursors.

Several years after first proving the usefulness of the technology, the team has now replaced its initial point-and-click cursor system with inputs sent to a touchscreen.

It led to a massive reduction in cost and increase in available applications.

“We were going to design our own touchscreen hardware, but then realized the best ones were already on the market”, Dr Nuyujukian said.

“So we went on Amazon instead and bought a Nexus 9 tablet.”

The high-tech neuroprosthetic was reprogrammed to communicate with the tablet via Bluetooth.

“Basically the tablet recognised the prosthetic as a wireless Bluetooth mouse,” explained Nuyujukian.

Paralysed patients involved in Nuyujukian’s project experienced a leap ahead from a computer interface that really only allowed them to type on a standard keyboard, to one with all the possibilities available to tablet users.

“It’s not just a prettier user interface; she now has access to the entire Android app store.”

The brain implant device can function for around two years without any issues, and engineers are working to extend its lifespan in the brain even further.

“We set out to utilise what’s already been perfected in terms of the hardware to make the experience more pleasant,” said Nuyujukian.

“We’ve now showed that we can expand the scope of our system to a standard tablet.”

But the team is far from finished.

They are working to implement click-and-drag and multi-touch manoeuvres in the next upgrade, and also want to use other operating systems while generally making the system more stable.

The goal is to let patients use the devices 24/7 without supervision.

“Our goal is to unlock the full user interface common to general-purpose computers and mobile devices,” said Nuyujukian.

“This is a first step towards developing a fully-capable brain-controlled communication and computer interface for restoring function for people with paralysis.”

The implant technology is described and demonstrated in the video below.