Bold dog plan could give locals a hand 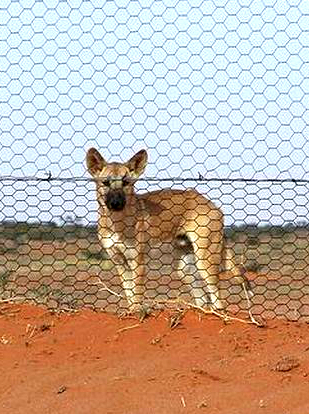 A group of Australian ecologists have suggested a bold experiment to help native species.

They want to alter the “dingo fence” - the dingo-proof structure stretching from eastern Queensland to the South Australian coastline - to enable dingoes to enter the Sturt national park in New South Wales.

The group proposed the test to assess whether dingoes could act as saviours for threatened native animals.

This runs against the conventional wisdom of many on the land, where dingoes are reviled as dangerous to livestock and even humans.

A new paper published in Restoration Ecology fleshes-out the ecologists’ idea that letting dingoes back into national parks could prove beneficial to native wildlife.

“Predation by foxes and feral cats is the key driver of extinctions, so we need to change what we’ve previously done and look at if the dingo can help,” said Dr Thomas Newsome of the University of Sydney, the report’s lead author.

“The dingo fence provides a unique opportunity – if we rebuild it on its eastern and southern sides we can monitor the recolonisation of the area by dingoes while minimising the impact upon graziers.

“If the theories hold true, we’d expect the dingoes to have positive effect on the ecosystem.”

Previous studies have shown that the dingo can have a big role in protecting and promoting small mammals, reptiles and birds.

Some believe they can be used by farmers to prey upon kangaroos, which compete with livestock such as sheep for pastoral land.

“There is a lot of evidence that dingoes have positive effects, we just need to find ways we can coexist with them,” Newsome said.

“It’s harder to sell the positives of dingoes if people don’t know about these benefits.”

It is clear to many that something must be done, with studies showing that dozens of endemic mammals alone have become extinct since European settlement in Australia.

The idea is not without precedent, as ecologists worldwide look at examples of “rewilding” as a way to restore native wildlife.

Rewilding sees top predators encouraged to control their natural areas, maintain a balance in the roles of all creatures in the ecosystem.

Rewilding of wolves in Yellowstone national park has had some astounding effects, seen in the video below.