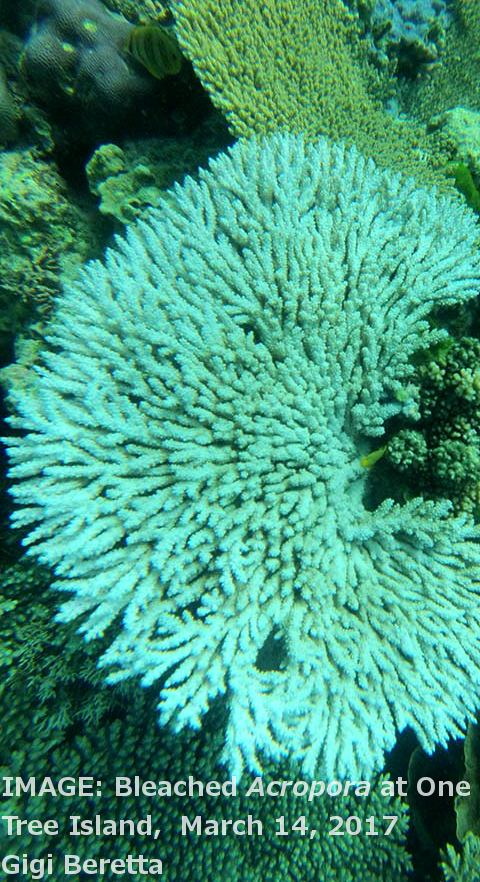 The latest spot-checks have again found bleaching on the Great Barrier Reef.

Professor David Booth, Marine Ecologist and former President of the Australian Coral Reef Society, has led a survey of the coral habitat and fish species at One Tree Island – a small coral cay off the coast of Queensland.

Prof Booth says the review made it clear that a widespread bleaching event is occurring.

“We have a big bleaching event on our hands—for me it’s the worst I have seen,” he said.

“I have been monitoring coral habitat and key fish populations at One Tree Island, with fellow UTS researcher Gigi Beretta, for a quarter of a century now including recording the demise of corals and associated fishes here after the 1998 bleaching event.”

Speaking from the One Tree Island research station, Prof Booth told a senate inquiry that better support for long-term monitoring studies is needed, as well as education and the establishment of a national coordination body.

“From Australia’s point of view, we are a major coal exporter to the world, and coal is a key contributor to global warming,” he said. “Hard choices need to be made by governments to curtail this and forgo some profits in favour of stewardship of our wonderful reef.”

Prof Booth’s reports from One Tree Island coincide with research published in Nature by Australian and international researchers, who say the 2016 bleaching event in the GBR affected 91 per cent of individual reefs.

Coral bleaching is triggered primarily by high sea temperatures, which are predicted to continue warming in coming decades.  Small increases of just one degree Celsius over a period of four weeks can trigger a bleaching event.

Even though bleached corals can recover if conditions return to normal, their periods of inactivity often have a flow on effect to other marine organisms.

Associate Professor David Suggett says that many parts of the Reef are now experiencing an unprecedented second year of mass, back-to-back bleaching.

“We have now reached a stage of coral loss on the GBR that was predicted for 20-30 years’ time,” he said.

“Whilst we must tackle climate change immediately and head on, we need complimentary and innovative reef management platforms to ensure we have reefs whilst mitigation can take effect.”

Although too soon to know if, or how much these corals will recover from this bleaching event, Prof Booth and Associate Prof Suggett concur that mass bleaching is leading to irreparable damage to the Reef.

“Severe coral bleaching that was virtually unknown before 1980 is now becoming an annual occurrence, with corals not having sufficient time between events to fully recover,” Prof Booth said.

“Urgent action is needed to curb greenhouse emissions and Australia is in strong position to show global leadership on this important issue.”

Associate Prof Suggett said it was clear the Reef is becoming irreversibly changed by these impacts.

“The time frame to intervene is rapidly diminishing, therefore we are calling for urgent, coordinated and integrated action to prevent further damage to the GBR—before it’s too late.”