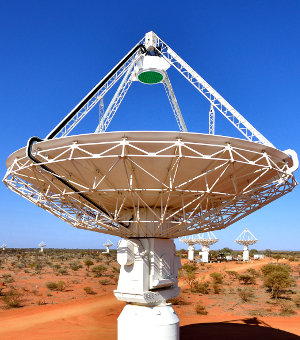 Just months after it was first commissioned, CSIRO's Australia SKA Pathfinder is now working as a fully fledged radio telescope.

It is a quick jump ahead for Australia’s role in developing and proving technologies for the international Square Kilometre Array (SKA) telescope.

The Australia SKA Pathfinder (ASKAP) has taken a very important snapshot of space.

The image is of a region of sky near the south celestial pole and is the equivalent of a black and white photo, but made from radio waves.

The image covers 10 square degrees on the sky — 50 times larger than the full Moon — and was made from nine overlapping regions ('beams') captured simultaneously.

Its quality proves the effectivness of ASKAP's two new features; ‘phased array feeds’ — new technology developed by CSIRO — and a special axis of rotation on each antenna.

The phased array feeds act as 'radio cameras', allowing the telescope to see large areas of sky at once.

“This image shows that the phased array feeds are stable over the 12 hours it takes to make an observation like this,” CSIRO's Dr David McConnell said.

“Now we can start to use the other advantages of phased array feeds, such as changing the beam size and shape for particular kinds of observations.”

As the telescope tracks radio sources, the phased array feed is kept in a fixed orientation to the sky, thanks to the special axis of rotation built into each antenna.

“With a conventional telescope we would have expected artefacts from bright sources at the edges of each beam,” Dr McConnell said.

“With ASKAP we don't get that, because the phased array feed is held at a constant angle to the stars.”

Even at this early stage, ASKAP was able to make the new image twice as fast as any comparable telescope in the Southern Hemisphere.

When completed, ASKAP will be able to survey the sky 25 times faster still, and will be the world's premier survey telescope for centimetre-wavelength radio astronomy.

The phased array feeds (PAFs) used for these commissioning tests are only the first generation of the design.

Procurement is now under way for better ‘second generation’ PAFs, which tests have shown will meet their ambitious performance targets.

The PAF design last year won awards for innovation from Engineers Australia and the technology is expected to find applications outside radio astronomy.