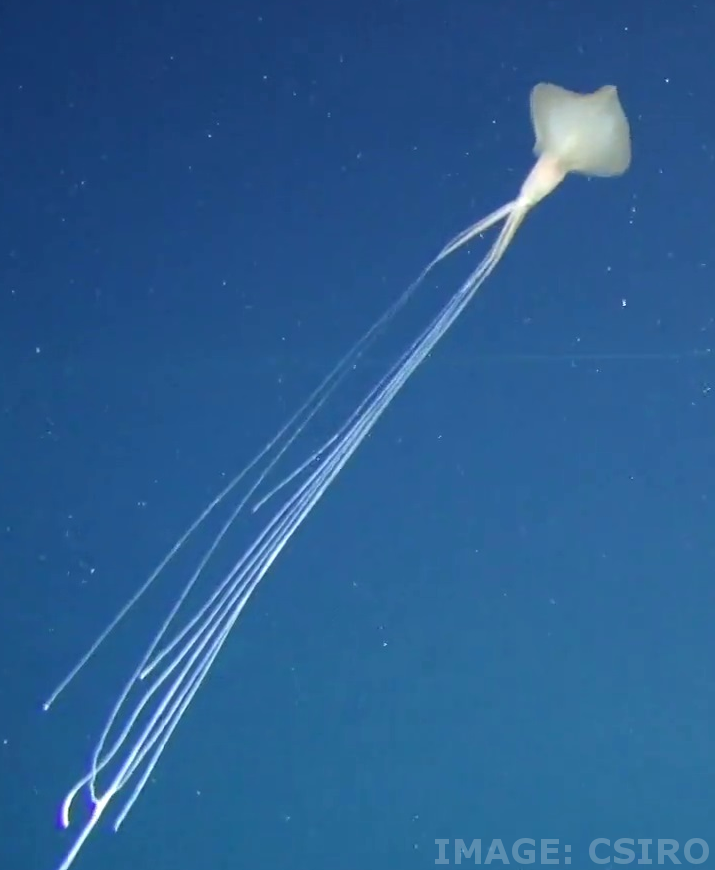 CSIRO scientists have captured rare footage of five Bigfin Squid in the Great Australian Bight - the first time they have been seen in Australian waters.

Bigfin Squid belong to the family Magnapinnidae, a group of deep-sea squid which have large fins and extremely long, slender arm and tentacle filaments.

They were filmed at depths of two to three kilometres during deep-sea survey voyages off the Bight, marking one of just a handful of sightings anywhere in the world.

“Most previous reports have been of single Bigfin Squid, so it’s exciting to have recorded five in the Great Australian Bight,” CSIRO marine scientist Deborah Osterhage said.

“Differences in their appearance meant we were able to confirm they were five separate individuals, rather than the same squid multiple times, and although the surveys covered a relatively large area, the squid were actually found clustered close together.”

“After spotting Bigfin Squid in the towed camera footage we were really on the look-out for them during the subsequent ROV voyage,” Ms Osterhage said.

“The ROVs were controlled by operators on the ship, and scientists were able to direct what was filmed.

“We were very excited to see the Bigfin Squid again and obtain this extraordinary footage.

“It has enabled us to learn more about this elusive and intriguing deep-sea squid.

“We measured one Bigfin Squid using parallel laser measurement guides and found it was over 1.8 metres long, with arm and tentacle filaments more than 11 times the mantle [body] length.

“We also observed their colour and behaviours, including filament coiling, a behaviour not previously seen in squids.”

Prior to these voyages almost nothing was known of animals living in the benthic zone (the zone near the sea floor) in the Great Australian Bight deep-sea.

“We also saw brightly coloured corals, tulip-like glass sponges, and many more beautiful and unusual animals. With every voyage we undertake we discover more about Australia’s vast deep-sea environment, and there is much to learn,” Ms Osterhage said.