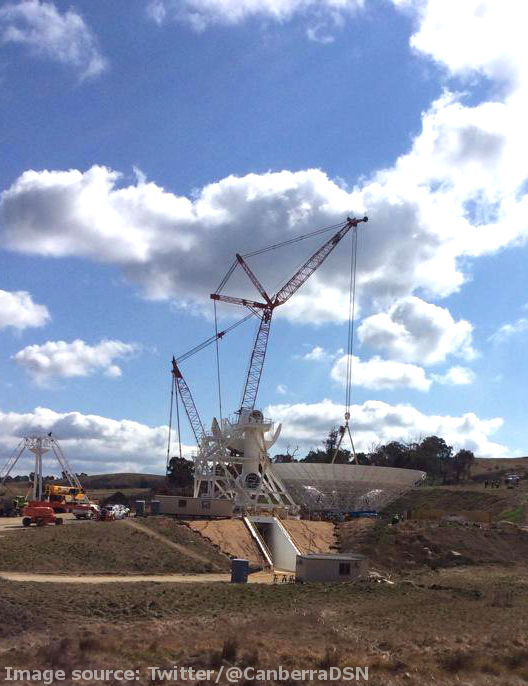 A giant crane is placing an enormous saucer-shaped dish on its base at Canberra's Deep Space Communication Complex today.

Beginning at 5:30am, workers are manoeuvring the 125-tonne, 34-metre diameter antenna dish onto the structure at Deep Space Station 36.

“Nice clear skies, virtually no wind and good temperatures,” he told the ABC.

“It will look like a UFO flying through the air on these massive cranes and these giant cables.

“Then actually very delicately placing it, with very high precision literally down to millimetre accuracy on the top of the 20-metre high framework.

“It will actually now take another 12 months to completely fit it out with all of its power systems, electronics, transmitters and receiver systems.

“So once the construction part is over it's then handed over to our technical services and engineering staff who will then spend that time calibrating and putting together the really sensitive electronics.”

If weather permits, they plan to put a second antenna in place as well.

Mr Nagle said the new equipment would be a big boost to the site's ability to communicate with spacecraft.

“We really need these additional dishes so that over the next 10 to 15 [years, when] there are so many more craft designed to go out there ... we have the capacity to be able to talk to them at the levels and amount of time that science teams want us to,” he said.

In other upgrades on the list, Deep Space Station 43 is receiving a new four-metre-long ultra-sensitive receiver cone.

The video below shows a time-lapse of a similar operation at Deep Space Station 35 in 2013.