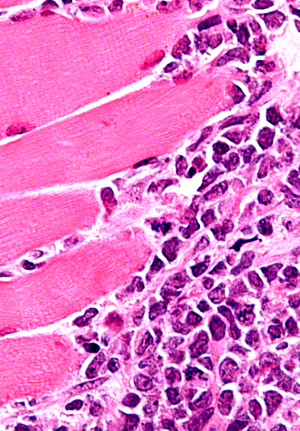 Researchers have discovered a single genetic abnormality which massively increases the chance of having childhood leukaemia.

People born with the particular condition have a 2,700-fold increased risk of acute lymphoblastic leukaemia.

Acute lymphoblastic leukaemia (ALL) is the most common childhood cancer.

Scientists have previously identified a small subset of ALL patients with repeated sections of chromosome 21 in the genomes of their leukaemia cells, the variant form of ALL is called iAMP21.

iAMP21 patients require more intensive treatment than many others.

Scientists have now reconstructed the sequence of genetic events that lead to iAMP21 ALL.

“Although rare, people who carry this specific joining together of chromosomes 15 and 21 are specifically and massively predisposed to iAMP21 ALL,” says Professor Christine Harrison, co-lead author from Newcastle University in the UK.

“Advances in treatment are improving patients' outcomes, but iAMP21 ALL patients require more intensive chemotherapy than other leukaemia patients.

“We have been able to map the roads the cells follow in their transition from a normal genome to a leukaemia genome.”

The team applied new techniques for analysing genomes, which allowed them to take a cancer cell at one point in time and deduce the relative timing and patterns of mutational events that occurred in that cell's life history.

The team sequenced nine samples from iAMP21 ALL patients, four with the rare chromosome translocation condition and five that occurred in the general population.

In all patients with the translocation event, the cancer was initiated by a catastrophic genetic event known as chromothripsis, which shattered chromosomes 15 and 21.

Their DNA repair machinery then pastes the chromosome back together in a flawed and inaccurate order.

“This is a remarkable cancer – for patients with iAMP 21 ALL we see the same part of the genome struck by massive chromosomal rearrangement,” said researcher Yilong Li.

“The method we've developed can now be used to investigate genetic changes in all cancer types.”

The team found a particular sequence of genetic events across the patients studied.

While they first seemed random and chaotic, the end result is the discovery of a new chromosome 21 in which the numbers and arrangement of genes are optimised to drive leukaemia.

The team will now use this method to decipher the genetic events that underlie many different cancer types.

Their paper, ‘Constitutional and somatic genomic rearrangements coherently restructure chromosome 21 in acute lymphoblastic leukaemia’, will be published in an upcoming edition of the journal Nature.