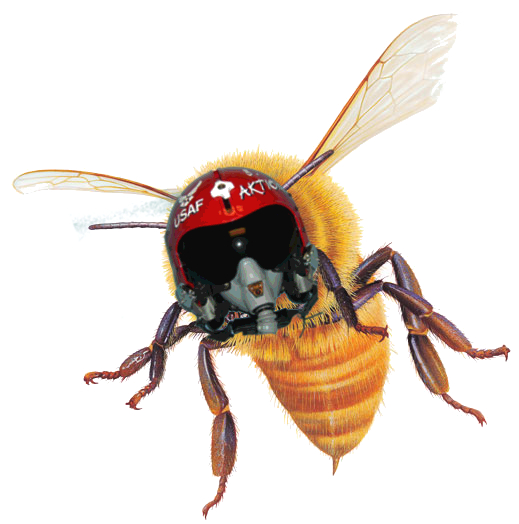 Honeybees are capable of landing with absolute precision on virtually any surface, now scientists have worked out how they judge their descent – and it is so simple we might just steal their idea.

Scientists at the University of Queensland (UQ) have shown the graceful landing of the honeybee is guided not by a sense of speed or distance, but with a simpler, visual method.

Honeybees look at the size of the thing they want to land on and judge their approach based on how rapidly their focal point increases in size. The method means a bee can land perfectly without having to know how fast it is flying or how far away the destination is

Humans are lucky enough to see the world in stunning stereo 3D, thanks to the orientation of our two eyes, but a bee’s eyes are much closer together and so lack the ability to judge depth like we can.

“So in order to land on the ground, they use their eyes to sense the speed of the image of the ground beneath them,” says Professor Mandyam Srinivasan at UQ's Queensland Brain Institute.

“By keeping the speed of this image constant, they slow down automatically as they approach the ground, stopping just in time for touchdown. “

To find out the secret to a perfect landing, researchers trained honeybees to land on discs that were placed vertically, and filmed them with high-speed video cameras.

“The boards carried spiral patterns that could be rotated at various speeds by a motor,” says Professor Srinivasan.

“When we spun the spiral to make it appear to expand, the bees ‘hit the brakes' because they thought they were approaching the board much faster than they really were.

“When we spun the spiral the other way to make it appear to contract, the bees sped up, sometimes crashing into the disc. This shows that landing bees keep track of how rapidly the image ‘zooms in', and they adjust their flight speed to keep this ‘zooming rate' constant.”

“For bees – when they're about to reach a flower, the image of the flower will expand faster than usual. This causes them to slow down more and more as they get closer, eventually stopping when they reach it.”

A mathematical model for the bees’ perceptive skills was generated from the findings. The most interesting application may be in the world of automated and semi-autonomous vehicles.

At the moment, the sensors which allow a reasonable landing from a robot-driven vehicle are complex, cumbersome and expensive, employing lasers and sonar to judge speed and distance. Current devices also generally give off active radiation which can reveal the location of a vehicle trying to blend-in.

By applying the honeybees’ approach to landing – the same data and calculations can be made using a simple webcam or smart-phone sensor. The models created by the research from UQ will almost certainly influence the future of artificial visual judgement.

Details of the study are accessible here.