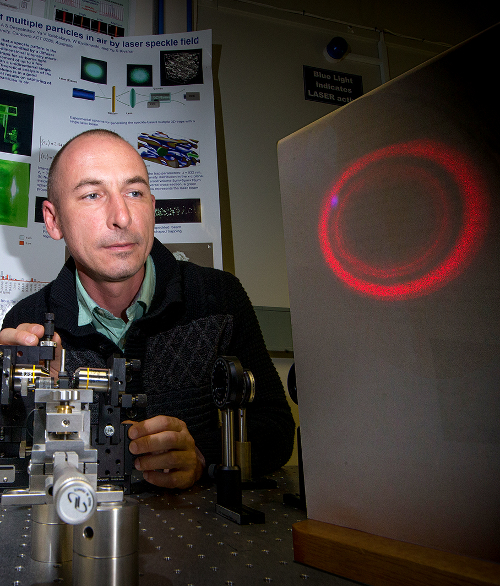 Physicists at ANU have built a tractor beam that uses a laser to repel and attract objects.

The hollow laser light is bright around the edges and dark in its centre, and the energy it creates heats up particles and the air around them.

Particles are then trapped in the dark centre of the beam.

The team can move the position of the hotspot by carefully controlling the polarisation of the laser beam, which allows them to manipulate the particle itself.

The long-distance optical tractor beam has been used to move gold-coated hollow glass particles one fifth of a millimetre in diameter a distance of up to 20 centimetres.

This is around 100 times further than previous experiments, which also used different designs.

“Demonstration of a large scale laser beam like this is a kind of holy grail for laser physicists,” said Professor Wieslaw Krolikowski, from the Research School of Physics and Engineering.

The new technique is versatile because it requires only a single laser beam. It could be used, for example, in controlling atmospheric pollution or for the retrieval of tiny, delicate or dangerous particles for sampling.

The researchers can also imagine the effect being scaled up.

“Because lasers retain their beam quality for such long distances, this could work over metres. Our lab just was not big enough to show it,” said co-author Dr Vladlen Shvedov, a driving force behind the ANU project, along with Dr Cyril Hnatovsky.

The work has been published in Nature Photonics.