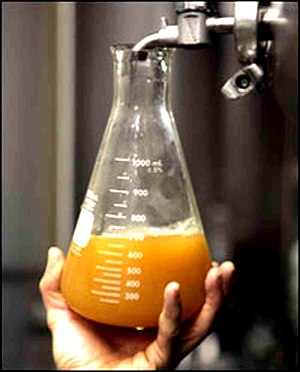 A new approach could see scientists able to produce drugs as easily as brewing beer, massively reducing the cost and energy requirements for many medications.

A new technique used evolution in reverse to successfully produce the HIV drug didanosine, and could be applied to almost any compound imaginable.

It involves the reversal of natural processes, starting with the desired product and using natural selection and random mutations to produce a series of specialized enzymes, which in turn make the final product out of a chain of chemical reactions.

The incredible process could smash the cost of producing drugs en masse, using a great deal less energy and human input as well.

To perform their latest research, a team of chemists first identified the drug that they wanted to produce – in this case didanosine, an extremely expensive anti-HIV drug sold under the trade names of Videx and Videx ECT.

The team identified a “precursor” molecule which would be converted into didanosine when subjected to a specific chemical transformation featuring a transformative enzyme.

They identified the enzyme and made use of the power of natural selection by making thousands of copies of the gene that makes the enzyme using a special copying technique that introduces random mutations.

The mutant genes were transferred into the gut bacteria E. coli in order to produce the mutant enzymes and placed into different ‘wells’.

After the cells were broken open and the contents mixed with the precursor compound, the amount of didanosine, in each well was measured. Researchers selected the enzyme that produced the greatest amount of the desired drug, then made enough of this optimized enzyme for the next step.

The team the identified a second precursor – an even simpler molecule that could be chemical converted into the first precursor – and an associated transformative enzyme.

They repeated the E.coli processing with the optimized enzyme and second precursor.

In subsequent tests, the well with the highest level of didanosine was the one in which the mutant enzyme was most effective in making the first precursor, which the optimized enzyme then converted into didanosine. This gave them a second optimized enzyme.

The researchers carried out this reverse selection process three times, until they could make didanosine out a simple and inexpensive sugar named dideoxyribose.

Using bioretrosynthesis, it will be theoretically possible to make almost any organic molecule out of simple sugars.

The proof-of-concept experiment was performed in vitro instead of in living cells to keep things simple, but the ultimate goal is to use the approach to produce artificial compounds by fermentation.

More details are available in the full report, accessible here.