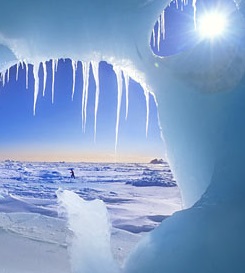 Scientists at the University of Alaska say that warming trends and sea ice declines are leading to changes in the vegetation of arctic coastal areas.

A review has been compiled by a team which analysed 10 years worth of data and research on the subject of Arctic ice. Their findings suggest sea ice loss is changing marine and terrestrial food chains, including a loss of sea-ice algae; the substance which underpins the marine food web. Larger plankton is thriving, replacing smaller, more nutrient dense plankton. Exactly what the implications are, nobody yet knows.

“Our thought was to see if sea ice decline contributed to greening of the tundra along the coastal areas... it’s a relatively new idea,” said Uma Bhatt, an associate professor with UAF’s Geophysical Institute working on collaboration with Skip Walker, a professor at UAF’s Institute of Arctic Biology.

The report on the review has stated that above water, loss of sea ice has destroyed old pathways of animal migration while opening new pathways for marine animals in others. The researchers say some animals and plants will become more isolated, but in the case of the farthest north and coldest parts of the Arctic, entire biomes may be lost without the cooling effects of disappearing summer sea ice.

A surprise and puzzling finding shows that despite a general warming and greening of Arctic lands in North America, some areas in northern Russia and along the Bering Sea coast of Alaska are showing recent cooling trends and declines in vegetation productivity. The biggest indication from the recent report is that more investigation is required.

“It’s not a simple story here,” Bhatt said. “I’m an atmospheric scientist and Skip (Walker) is a plant biologist. We have had many conversations to understand each other so we might better understand what’s happening in the Arctic.”

The report on the ecological consequences of sea-ice decline is available online.