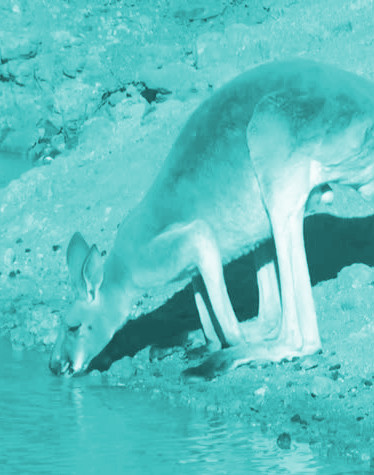 A new study has revealed some interesting insights into the health of Australian drinking water supply catchments.

“Cattle, sheep, rabbits and kangaroos living in the area can shed faeces containing Cryptosporidium oocysts (eggs) into raw water supply catchments, and so we were interested in understanding the sources, quantities and type of Cryptosporidium being shed by animals” said researcher Alireza Zahedi said.

“Cryptosporidium is one of the most common waterborne parasites throughout the world, causing gastroenteritis in humans, but there has been relatively little research on the levels of human-infectious Cryptosporidium shed by animals in Australian drinking water catchments. The two most important species that cause infections in humans are Cryptosporidium hominis and C. parvum.

“Cryptosporidium oocysts (eggs) are shed into the environment in animal faeces but often don’t reach raw drinking water sources. If the eggs do enter raw drinking water sources, frequently they are no longer viable and therefore cannot cause infections. Despite this, the pathogen has been responsible for numerous waterborne outbreaks overseas and continues to represent a public health concern to water utilities in developed countries.”

Mr Zahedi sampled 5,774 animal faecal samples over three years to determine which animal species were infected with strains of Cryptosporidium, with the potential to cause infection in humans.

“To ensure we were testing different animals, we randomly collected freshly deposited faeces from the ground” Mr Zahedi said.

Results of the testing showed that overall the prevalence of infection with Cryptosporidium was generally higher than previously reported in Australian catchments.

Importantly, most of the Cryptosporidium species identified in this study have the potential to cause infection in humans.

A Cryptosporidium hominis strain, associated with outbreaks of human gastroenteritis worldwide, was detected in samples from kangaroos and cattle, however it was not possible to determine if it was still viable (infectious) in the samples screened.

“Further studies are required to better understand the transmission of Cryptosporidium species from wildlife to humans,” Mr Zahedi said.

“The presence of human-infectious Cryptosporidium species in both livestock and wildlife inhabiting drinking water supply catchments may have implications for management of drinking water sources and monitoring must continue.”

Mr Zahedi says that despite the detection of the Cryptosporidium parasite in water supply catchments, the parasite has not been detected in treated bulk drinking water used for retail distribution and household consumption. All water utilities in Australia are required to meet the requirements of the Australian Drinking Water Guidelines in order to ensure safety of supplies and this process is closely regulated by health departments in each state or territory.

“While treated water is not a concern, environmental pollution from human and domestic livestock faeces, such as contamination of catchments due to human and livestock could be a potential source for wildlife infections with this parasite.”