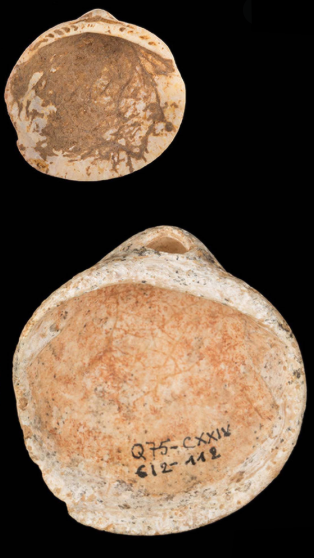 Modern humans collected cockle shells and wore them on a string around 120,000 years ago, according to new research.

The shell necklaces are considered one of the earliest adornments ever discovered.

Shells were one of the first ways that humans adorned and expressed themselves, with examples of deliberately-collected shell assemblages at human sites dating as far back as 160,000 years ago.

The latest shells discovered are from the latest Mediterranean Paleolithic site, Qafzeh Cave (dated to 120,000 years ago).

They are all naturally perforated, suggesting that these shells were deliberately collected and strung together as beads.

To investigate the possibility of deliberate suspension, researchers collected the same species of perforated clamshells (Glycymeris) and simulated the potential use and wear present on the original shells: first systematically abrading the shells against different materials like leather, sand, and stone to produce a catalogue of wear patterns, then hanging the shells on strings made from wild flax to identify wear patterns specific to string suspension. They then compared these wear patterns to those of the original Qafzeh Cave shells.

The Qafzeh Cave shells revealed traces consistent with those created in the simulated shells via contact with a string, as well as traces of shell-to-shell contact (indicating the shells hung closely together). Four of the five original shells also revealed traces of an ochre colouring treatment.

“Modern humans collected unperforated cockle shells for symbolic purposes at 160,000 years ago or earlier, and around 120,000 they started collecting perforated shells and wearing them on a string,” says researcher Daniella Bar-Yosef Mayer from Tel Aviv University.

“We conclude that strings, which had many more applications, were invented within this time frame.”