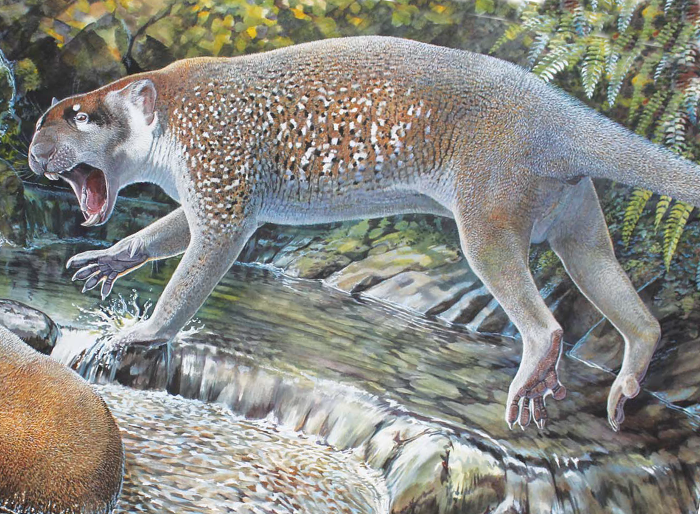 Australian scientists have discovered a new species of marsupial lion in north Queensland that has been extinct for at least 19 million years.

The findings are based on fossilised remains of the animal’s skull, teeth, and humerus (upper arm bone) found by University of New South Wales (UNSW) scientists in the Riversleigh World Heritage Area of remote north-western Queensland.

Named in honour of palaeoartist Peter Schouten, Wakaleo schouteni was a predator that stalked Australia’s abundant rainforests some 18 to 26 million years ago in the late Oligocene to early Miocene era.

This meat-eating marsupial is estimated to have been about the size of a dog and weighed around 23 kilograms.

The new species is about a fifth of the weight of the largest and last surviving marsupial lion, Thylacoleo carnifex, that weighed in at around 130 kilograms and which has been extinct for 30,000 years.

Members of this family, the Thylacoleonidae, had highly distinct large, blade-like, flesh-cutting premolars that they used to tear up prey.

The discovery comes just a year after the fossilised remains of a kitten-sized marsupial lion were found in the same famous fossil site in Queensland.

With this new find, the researchers believe that two different species of marsupial lion were present in the late Oligocene at least 25 million years ago.

The other, originally named Priscileo pitikantensis, but renamed Wakaleo pitikantensis, was slightly smaller and was identified from teeth and limb bones discovered near Lake Pitikanta in South Australia in 1961.

This latest discovery reveals that the new species (W. schouteni) exhibits many skull and dental features of the genus Wakaleo but it also shared a number of similarities with P. pitikantensis - particularly the presence of three upper premolars and four molars, previously the diagnostic feature of Priscileo.

Further similarities of the teeth and humerus which are shared with W. schouteni indicate that P. pitikantensis is a species of Wakaleo.

According to the authors, these dental similarities distinguish W. schouteni and W. pitikantensis from later species of this genus, all of which show premolar and molar reduction, and suggest that they are the most primitive members of the genus.

“The identification of these new species have brought to light a level of marsupial lion diversity that was quite unexpected and suggest even deeper origins for the family,” says sead author Dr Anna Gillespie, a palaeontologist from UNSW.