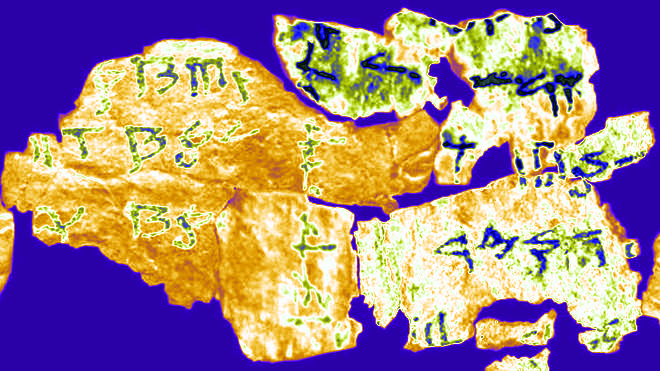 Researchers have used AI to find more details on the authors of the Dead Sea Scrolls.

The Dead Sea Scrolls are among the greatest finds in archaeological history, providing scholars with the oldest known manuscripts of the Hebrew Bible (Old Testament) and many formerly unknown ancient Jewish texts.

The scrolls are made of leather and inscribed by hand with black ink, written some time over 2,300 years ago.

Despite 70 years of deep investigation, the individual people behind the scrolls have eluded scientists, because the scribes are anonymous.

Now, by combining the sciences and the humanities, Dutch researchers have cracked the code, which enables them to discover the scribes behind the scrolls.

Dr Mladen Popović, professor of Hebrew Bible and Ancient Judaism at the University of Groningen, teamed up with Dr Lambert Schomaker, professor of Computer Science and Artificial Intelligence at the university, working through the university's Qumran Institute, which is dedicated to studying the Dead Sea Scrolls.

Dr Schomaker has long worked on techniques to allow computers to read handwriting, often from historical materials. He has also performed studies to investigate how biomechanical traits, like the way in which someone holds a pen or stylus, would affect handwriting.

In this study, they focused on one scroll in particular: the famous Great Isaiah Scroll (1QIsaa) from Qumran Cave 1.

The handwriting in this scroll seems near-uniform, yet it has been suggested it was made by two scribes sharing a similar writing style.

“This scroll contains the letter aleph, or ‘a’, at least five thousand times. It is impossible to compare them all just by eye,” Dr Schomaker said.

So, they turned to computers to analyse the large dataset of 5,000 handwritten a's.

Digital imaging makes calculations possible at the microlevel of characters, such as measuring curvature (called textural), as well as whole characters (called allographic).

The analysis of textural and allographic features showed that the 54 columns of text in the Great Isaiah Scroll fell into two different groups that were not distributed randomly through the scroll, but were clustered, with a transition around the halfway mark.

The team then recomputed the similarities between the columns, now using the patterns of letter fragments. This second analytical step confirmed the presence of two different authors. Even when the researchers purposely added extra noise to the data, the result did not change.

Certain aspects of the scroll and the positioning of the text had led some scholars to suggest that after column 27 a new scribe had started, but this was not generally accepted.

“Now, we can confirm this with a quantitative analysis of the handwriting as well as with robust statistical analyses,” Dr Popović said.

“Instead of basing judgment on more-or-less impressionistic evidence, with the intelligent assistance of the computer, we can demonstrate that the separation is statistically significant.”

This study of the Great Isaiah Scroll opens up a totally new way to analyse the Qumran texts based on physical characteristics. Now, researchers can access the microlevel of individual scribes and carefully observe how they worked on these manuscripts.

“This is very exciting, because this opens a new window on the ancient world that can reveal much more intricate connections between the scribes that produced the scrolls,” Dr Popović said.

“In this study, we found evidence for a very similar writing style shared by the two Great Isaiah Scroll scribes, which suggests a common training or origin. Our next step is to investigate other scrolls, where we may find different origins or training for the scribes.”

The research paper is accessible here.