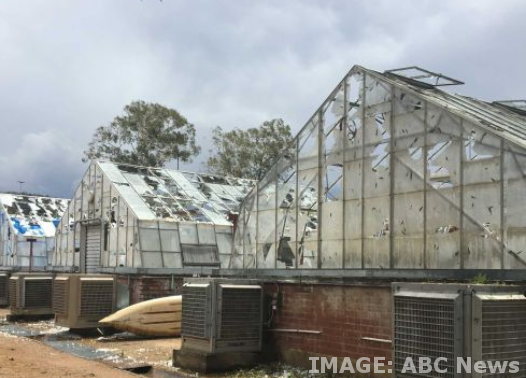 Years of plant research have been destroyed by hailstorms in the ACT.

ACT Emergency Services Agency received over 1,900 calls for help when a storm swept through this week, leaving over 1,000 homes without power.

The Insurance Council of Australia says 15,000 claims have been made in the wake of Monday's storms from an area including the ACT and Sydney's Sutherland Shire.

The CSIRO was among the worst hit, with large holes punched in the roofs of a number of their glasshouses.

“We're very fortunate that none of our staff were hurt,” Ms Zielke said.

“Those 65 glasshouses of course held a lot of research and we're really feeling for our scientists at the moment that are so dedicated to their work and have spent years working on some of the projects in there.

“Unfortunately, most of those projects will be totally lost.”

Much of CSIRO’s work at the facilities was aimed at improving crop sustainability, with researchers growing different forms of wheat, barley, legumes and cotton in the damaged glasshouses.

“[They were] largely focused on environmental research — how to reduce the amount of water, chemical and fertiliser use,” Ms Zielke said.

“For projects that potentially might have been close to the end of say two or three years work, that is really distressing.

“But I'm sure we'll overcome and continue to improve our work going forward, but it is a great loss, and of course not just to CSIRO but also the companies and farmers involved in those projects.”