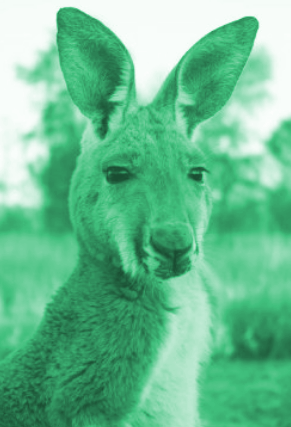 A new study shows kangaroos stare at humans to ‘ask’ for help.

Animals that have never been domesticated, such as kangaroos, can intentionally communicate with humans, challenging the notion that this behaviour is usually restricted to domesticated animals like dogs, horses or goats, according to a first of its kind study.

The paper is published in Biology Letters.

The research revealed that kangaroos gazed at a human when trying to access food which had been put in a closed plastic container.

The kangaroos used gazes to communicate with the human after trying and failing to open the container themselves, a behaviour that is usually expected for domesticated animals.

“Their gaze was pretty intense,” said co-author Dr Alexandra Green, a post-doctoral researcher in the Sydney School of Veterinary Science at University of Sydney.

“We’ve previously thought only domesticated animals try to ask for help with a problem, but kangaroos do it too.

“If they can’t open the box, they look at the human and back to the container. Some of them used their nose to nudge the human and some approached the human and started scratching at him asking for assistance.”

Ten out of 11 kangaroos tested actively looked at the person who had put the food in a plastic container to get it (this type of experiment is known as “the unsolvable problem task”).

Nine of the 11 kangaroos additionally showed gaze alternations between the container and the person present, a heightened form of communication.

Like dogs and goats, kangaroos are social animals and Dr McElligott’s new research suggests they may be able to adapt their usual social behaviours for interacting with humans.

“Through this study, we were able to see that communication between animals can be learnt and that the behaviour of gazing at humans to access food is not related to domestication,” Dr McElligot says.

“Indeed, kangaroos showed a very similar pattern of behaviour we have seen in dogs, horses and even goats when put to the same test.”

The kangaroos in the study were not wild kangaroos in the bush, as they would be too fearful around humans. The kangaroos were captive animals living at a number of zoos in Australia. They were familiar with humans but they are still non-domesticated (the definition of domesticated is animals selectively bred over generations to live alongside humans).

“Our research shows that the potential for referential intentional communication towards humans by animals has been underestimated, which signals an exciting development in this area,” Dr McElligott said.

“Kangaroos are the first marsupials to be studied in this manner and the positive results should lead to more cognitive research beyond the usual domestic species.”