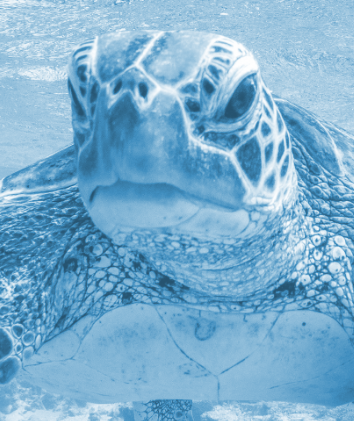 New footage has raised new questions about the aggressiveness of sea turtles.

Researchers have captured fascinating video footage of a shark attacking a sea turtle from the turtle’s perspective.

A sea turtle’s shell is an iconic trait, protecting the ocean wanderers from becoming the next meal of a hungry shark. As such, they are often perceived as placid creatures that hide behind their protective “shield” at the first sign of danger.

PhD Candidate Jenna Hounslow from Murdoch University’s Harry Butler Institute says it is not surprising that a tiger shark would attempt to kill and eat a sea turtle, considering they are one of the main prey items of tiger sharks.

Ms Hounslow explains that aggression and fighting behaviour may have been previously overlooked as anti-predator behaviour in sea turtles.

“What amazed me was to see the turtle aggressively defending itself by attempting to bite the attacking shark,” Ms Hounslow said.

The interaction was captured using ‘smart tags’, a kind of action camera coupled with a Fitbit, attached to the sea turtle.

The footage was captured as part of a larger project of the WA DBCA Marine Science Program, in conjunction with the Yawuru Joint Management program (between the Yawuru Native Title Prescribed Body Corporate (PBC) and DBCA), as well as the participation of the Yawuru Country Managers. The project studies turtle foraging behaviour in Roebuck Bay in Western Australia, in the hope of revealing the poorly understood lives of flatback turtles on their feeding grounds.

Dr Sabrina Fossette from WA DBCA added that many aspects of the lifecycle of flatback turtles are still relatively unknown to science.

“This new technology offers us unparalleled insight into what these turtles do when they are at sea away from their nesting beaches, which represents the largest portion, yet most poorly understood, aspect of their lives.” Dr Fossette said.

“We suspect the aggressive behaviour is simply a means to reduce the chances of being eaten when the shell does not offer full protection. On this occasion, the turtle was able to escape the shark unscathed.”

More details are available in this paper, and the footage can be seen below.