Bushfire risk for those who move 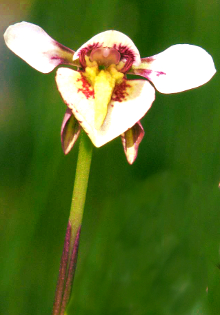 Researchers have discovered new details of a wily and sexually deceptive orchid.

A new study shows the orchid Pterostylis cycnocephala exploits the sexual preferences of their male pollinators to achieve pollen transfer.

This orchid attracts its pollinator, a male Bradysia gnat, with the ‘perfume’ of a female gnat and a black appendage that looks like a female gnat.

The male then courts the apparent female with wing fanning and abdomen curling, before clasping the flower with its genitalia and rotating 180° as they attempt to assume their regular mating position.

This movement triggers a ‘booby trap’ where the plant snaps shut, and he must climb out becoming covered in pollen in the process.

After the male is caught in the flower, it can take as long as 38 minutes to escape, the study found.

“This strategy of sexual deception, apart from a couple of exceptions, is unique to orchids,” says Dr Noushka Reiter from Royal Botanic Gardens Victoria.

“Fortunately for the male, he can escape. With some other orchids, and with carnivorous plants, getting trapped can mean death,” says PhD candidate Tobias Hayashi.

After becoming trapped, the gnat typically forces its way through the column wings, past the anther (the male part of the plant) where it is covered in pollen and escapes through the front of the galea (the helmet-shaped part that protects the reproductive parts from rain, wind, or unwanted visitors).

The study found that male gnats located flowers hidden from view, suggesting long-range attraction is primarily due to floral odour.

The study is the first detailed investigation of sexual deception of male gnats in Australian orchids and represents an example of convergent evolution with some Neotropical Lepanthes orchids, which also sexually deceive male Bradysia.