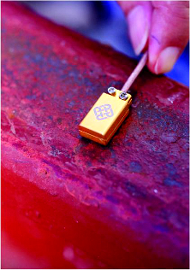 Research engineers have created a tiny device which can sense wasted electromagnetic energy, and could improve the reliability and efficiency of virtually any electrical device or system.

A small chip, just 1mm thick, can be placed on any sensing point of interest to detect electrical currents. Incredibly, it requires no additional power supplies or any kind of signal conditioners.

The new device manages the vast improvement on previous designs through some very tricky engineering.

The chip is quite an amazing work of advanced functional materials. It is made from rare earth multiferroics with giant magnetoelectric properties, enabling a direct detection of magnetic fields generated by electricity and a linear conversion of these magnetic fields into electrical voltage signals.

“Our smart sensors are essentially simple, totally passive and capable of producing large and clear output voltage signals which are 2,000 times higher than the traditional current sensors,” said electrical engineering researcher Professor Derek Siu-wing Or, from the Department of Electrical Engineering at Hong Kong Polytechnic University.

“This passive and self-sustainable nature allows real-time, nonstop monitoring of the ‘health’ of electrical equipment, including those carrying high voltages, heavy currents and/or strong electromagnetic fields.”

Professor Or says the sensors can even contribute to the systems they monitor.

“Besides, these smart sensors can be tailored to harvest electromagnetic radiations emitted by the electrical equipment being monitored and to turn them into useful electrical energy. The stored electrical energy can be used to power up microcontrollers, displays, wireless transmitters, etc., further advancing the smart sensor technology toward energy-harvesting smart wireless sensors.”

The wireless sensors are being tested in electrical traction systems on trains in both Hong Kong and Singapore, it is hoped the greater level of monitoring will reduce the amount of stoppages and break-downs.