Testing ground set for plasma jar to the stars 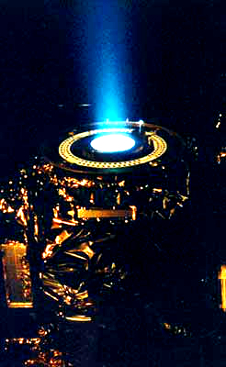 Australian engineers have their eyes on inter-stellar skies, and are about to test the jet engine that may take them there.

Two ANU researchers are laying the foundations for a future bridge to the stars with the development of a ground-breaking new propulsion device dubbed the ‘Helicon Double Layer Thruster (HDLT)’.

The thruster uses a swirling mass of plasma stimulated by electromagnetism to provide a totally new way to get around, one which would be perfect for the conditions and extended periods of time required for space travel.

Over the last few years, the team behind the HDLT has been working with engineers from around the world to build a simulator spacecraft to test the new thrusters – and the test facility named ‘Wombat XL’ is now nearing completion.

Wombat XL resides at the Mount Stromlo Space Simulation Facility. It took six engineers two years to install at a cost of $3.8 million, but will now put Mount Stromlo on the top of the list of places to design, build and test space-bound projects.

The thrusters, about to undergo simulations in the electromagnetic vacuum of Wombat XL, run on a plasma gas.

“Imagine a bottle which is open at one end,” says Professor Christine Charles from the Research School of Physics & Engineering, of her space-bound invention.

“At one end you introduce a gas, and you have an antenna winding around the bottle. When you put power to this antenna, it ionizes the gas and creates plasma.

“It also has other [metallic coils] to create a magnetic field which accelerates the plasma out the back of the spacecraft, producing thrust.”

“It will work forever as long as you have propellant gas,” she said.

They are more efficient for longer periods of time, potentially extending the range of human and robotic exploration of the stellar neighbourhood.

The HDLT is all built for speed.

“The velocity of a plasma thruster increases with time and they can also get to very high velocities,” explains Dr Charles.

“The HDLT can also work with carbon dioxide. So with planets like Mars and Venus where you mostly have carbon dioxide in the atmosphere, you could refuel as you go. This is a great advantage because at the moment all missions require that you carry the propellants from Earth.

“There are also no major issues with parts or erosion. As long as you provide the power and the propellant you can go forever. So with the right development this technology might get us very, very far… and hopefully back again.”