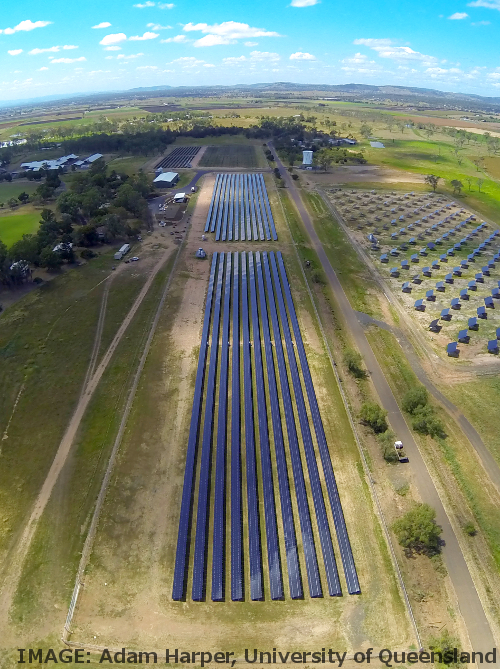 A new age of solar energy and information is dawning in Queensland.

The state’s largest solar array was switched on over the weekend.

The photovoltaic (PV) modules will produce enough clean energy to power more than 450 average Queensland homes and will displace the equivalent of 5600 tonnes of carbon dioxide annually.

The site features a range of technologies, set up so that different approaches can be tested on one site.

For the first time in Australia, multiple PV mounting technologies including fixed-tilt, single-axis and dual-axis tracker technologies will be in operation side-by-side in the same field to inform electrical and economic performance.

The plant will also include battery storage to improve understanding of the value of short- and medium-term energy storage, its impact on the quality of power supply and any resulting economic benefits.

First Solar – the company responsible for the engineering and construction and supply of the panels – says the new Queensland facility’s capability and research potential is unrivalled almost anywhere in the world.

“This research is about improving the way that we integrate solar into our state’s overall energy mix. It also works towards establishing and proving the business model for solar generation in Australia at the megawatt scale,” Professor Meredith said.

“Queensland gets about 2,700 hours of sunlight a year. This site turns that into energy, and into knowledge about how to better service local, national and international energy needs through effective solar technologies.”

The development is funded by a $40.7 million Federal Government Education Investment Fund program grant administered by the Department of Education.

The Gatton project is part of research collaboration between UQ, the University of New South Wales, First Solar and AGL PV Solar Holdings Pty Ltd, an affiliate of AGL Ltd.