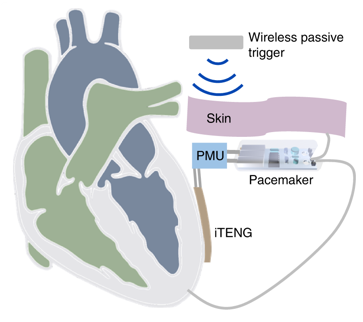 Scientists have developed a power source that generates electricity using the energy of the beating heart.

The implantable device has been demonstrated in adult pigs and shown to be capable of correcting irregularities in the heart rhythm known as sinus arrhythmia.

Currently, pacemakers and other implantable medical devices are powered by batteries that are bulky, rigid, and short-lived.

Implantable, self-powered energy harvesters have been proposed for physiological regulation, but until now they had not been tested in small animal and cell models with low energy demands.

The energy harvester, which is paired with a power management unit and the pacemaker, is biocompatible and mechanically durable.

Contact electrification is mainly caused by the transfer of surface electrons, before an electrical potential between two triboelectric layers drives the electrons through external loads due to electrostatic induction.

It was tested on an adult male Yorkshire pig weighing 45kg.

The iTENG was placed between the heart and pericardium, and the PTFE side faced the left ventricular wall.

The electrical energy generated by iTENG was stored in a 100μF capacitor through a rectifier. As a result, the voltage of capacitor could be charged from 0 to 3.55V within 190 min under conditions of blood pressure of ~100/70 mmHg and heart rate of ~77 bpm.

The energy harvested by the iTENG from cardiac motion was stored in a capacitor (100μF, 3.55V) to drive a commercial pacemaker.

The commercial pacemaker generated a series of pacing electrical pulses with a voltage of about 4V and a pulse width of 0.9ms.

Finally, a light-emitting diode (LED) directly connected to the implanted iTENG was shown to blink synchronously with heart beating.

“[The pacemaker] was fully implanted in adult pigs and all of the energy for cardiac pacing is reclaimed from the heart-beating energy of the same animal,” said Zhou Li from the Chinese Academy of Sciences.