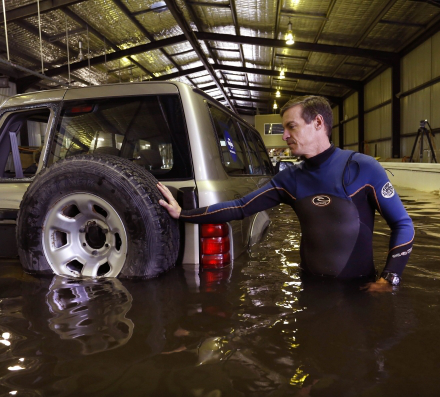 It does not take much water to push cars off the road.

Engineers at the University of New South Wales (UNSW) have investigated how easily cars can be pushed by even the smallest currents.

The experiments show that crossing floodwaters is a dangerous decision that can easily become life-threatening.

With heavy rainfall and the risk of flash flooding around the country, their findings are particularly timely.

The tests were performed in a specially configured test tank in Manly Vale, in northern Sydney.

“What was surprising was just how little water it took to make even a large vehicle unstable,” said principal engineer Grantley Smith, who led the research.

“They became vulnerable to moving floodwaters once the depth reached the floor of the vehicle. Even in low water depths and slow flow speeds, floodwaters had a powerful enough force to make them float away.”

The tests are a world first: previous experiments to understand the force of floodwaters have relied on using vehicle miniatures, rather than actual cars.

Even the engineers were surprised how easily cars weighing more than a tonne quickly became buoyant and unstable.

Even a 2.5 tonne Nissan Patrol 4WD can be rendered unstable by floodwater 45cm high, and a similar flow speed of 1 metre/second.

Once the water reaches 95 cm, the four-wheel drive can completely float, and needs almost zero force to move it by hand. By contrast, an able-bodied adult is much more stable in flowing water than the 4WD vehicle.

Part of the reason is that modern cars are made so airtight, for comfort, meaning they float easily in small amounts of water. Additionally, researchers say people often underestimate the power of a swathe of moving water.

“If a house is exposed to floodwaters two metres deep and 20 metres wide – travelling at a steady 1 metre/second – the force is equivalent to being hit by a 40-tonne semi-trailer every 15 seconds.”

The experiments were funded by UNSW and the NSW State Emergency Service, the NSW Office of Environment and Heritage, with IAG (Insurance Australia Group) providing the cars.