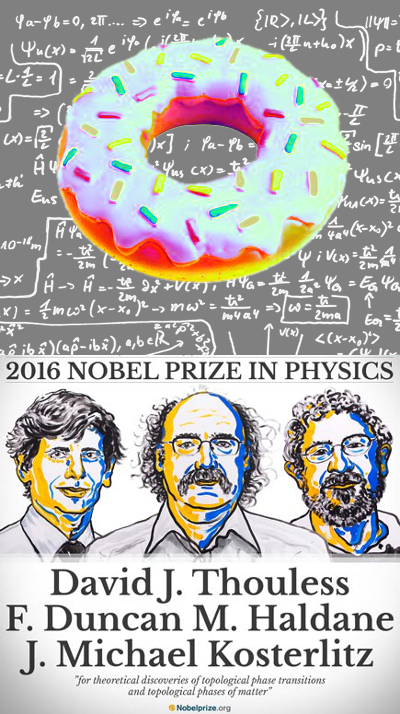 Three British scientists have been awarded the Nobel Prize in physics for some mind-bending breakthroughs.

David Thouless, Duncan Haldane and Michael Kosterlitz will share the 8m Swedish kronor ($A1.2 million) prize announced by the Royal Swedish Academy of Sciences in Stockholm.

The trio’s theoretical work on 'topological phase transitions' and 'topological phases of matter' have transformed how scientists think about materials, and are paving the way for advances like quantum computers and even room-temperature superconductors.

Technically, David Thouless received half the prize, while Michael Kosterlitz and Duncan Haldane shared the other half. This was because Kosterlitz and Haldane each worked on different problems in the field while Thouless had a hand in both.

Their field - Topological physics - explores the unusual properties of matter when it is confined to 2-dimensional surfaces or thin layers and then cooled to extreme temperatures.

Topology is all about changes in the properties of surfaces when subject to deformation.

Some of the exotic states of matter that topologists deal with carry unexpected electrical properties, such as superconductivity - the sudden ability of electrons move with zero resistance - when cooled.

Using topology, Thouless, Haldane, and Kosterlitz have shed light on mysteries like how super-cold films of helium change their phase of matter, and what effect that has on their properties.

But it is not all theoretical - the research has led to new materials with exciting properties. One example would be materials are called “topological insulators,” which can conduct electricity only on their surface.

This led to the development of stanene —a one-atom thick layer of tin — that could perhaps replace copper components in computers.

A more complete description of each winner’s specific contribution is accessible here.

The three winners showed the customary humility, leaving the gushing to their colleagues.

Steve Bramwell, a physicist at UCL, said the prize was “richly deserved”.

“The behaviour of the materials around us is extremely complex. The job of physics is to identify simple principles by which we can understand the material world and predict new phenomena. This is a really difficult challenge because the average substance may contain a trillion trillion atoms, all interacting with each other,” he said.

“The ingenuity of Kosterlitz, Thouless and Haldane has been to show how a large class of real materials - particularly films and chains of atoms - can be understood in terms of the simple mathematical principles of topology - that is how the atoms are connected: a doughnut and a teacup have the same topology as they each have a hole in them.

“The breakthroughs of these three scientists allowed massive progress to be made in understanding and calculating the properties of many material systems. In my own case it opened up 25 years of research into magnetic thin films - which is what computer hard drives store information on. Many other scientists across many disciplines owe an equal debt to the theoretical insights of Kosterlitz, Thouless and Haldane.”

“The prize is normally given to someone who has made their discoveries a long time ago and has led to lots of applications.

“This is really recognising a scientific impact. It’s always nice when you see your own heroes are celebrated. These are people we, in the field, have hugely respected for a long time and it’s great to see them recognised.”

A member of the committee that bestowed the award described the trio’s discoveries using a bagel analogy – in the video below - which is already achieving a level of online fame.