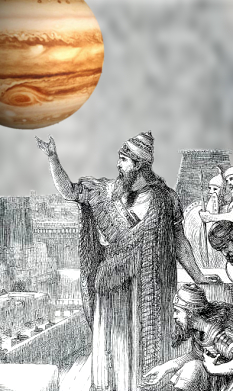 The earliest ever examples of mathematical and geometric astronomy have been identified on ancient Babylonian stones.

The discovery shows for the first time that ancient Babylonians were able to calculate the position of Jupiter using geometric techniques that experts had thought came 1,400 years later in Europe.

The cuneiform tablets on which the text is inscribed were unearthed from an archaeological dig around 200 years ago, in what is now modern day Iraq.

The tablets were most likely written in Babylon between 350 and 50 BCE.

They are part of a collection of 450 astronomy tablets from Babylon and Uruk, which contain celestial data arranged in rows and columns, but nobody had understood specifically what they meant.

Four of the tablets dealt with geometrical trapezoid shapes, but it was the fifth - trapezoid text A – that provided the key to understanding them all.

“I discovered that they describe the motion of Jupiter as a velocity, the number of degrees it moves across the sky in a day,” Dr Ossendrijver said.

“If you plot the velocity of Jupiter against time, you get a creeping curve which looks like a rectangle with a slanted top — that's the trapezoid.”

Jupiter’s first two intervals after it appears along the horizon at night were carved into the tablets, showing the planet’s position in the sky after 60 and 120 days.

One of the trapezoids was partitioned into two smaller shapes to compute the time when Jupiter covers half its 60-day distance.

“We're not really sure why the Babylonians were so interested in the motion of the planet Jupiter, but one possible explanation is that Jupiter was associated with Marduk the supreme god of Babylon,” Dr Ossendrijver said.

“These astronomers or priests were employed by Babylon's main temple where Marduk was venerated. Each god had a star and Marduk's was Jupiter.”

Babylonian writing was originally thought to have been developed for agricultural purposes, such as measuring the size of a field or timing its use.

“But by about 2000 BCE they began to develop a form of mathematics with sophisticated field computations and methods for solving what we call quadratic equations that go beyond these practical things. It's a way of describing and computing motion, similar to what we today call integral calculus,” the expert said.

The find mean some history books must be re-written, as it was previously believed that calculus came from 14th century.

“This is highly surprising no-one expected to find something like this in antiquity,” Dr Ossendrijver said.